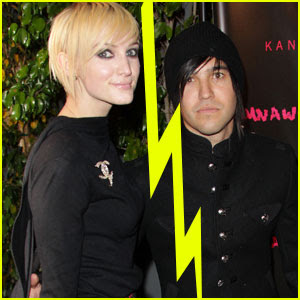 Thanks to gossipcop for the photo

Numerous sources are reporting that after 2 and a half years of marriage, the singer/actress filed for divorce. She signed the documents citing "irreconcilable differences" as the reason for the split. Simpson married the former Fall Out Boy bassist back in 2008 at her parents' house. They have a 2 year old son together (Bronx) and Simpson is asking for joint legal custody and primary physical custody. She is also seeking spousal support. As with any couple that files that kind of paperwork, they are asking for privacy during this "very difficult time as they enter the next phase of their lives."
I am not a big fan of Ashlee; but I like some of her music (and I LOVE her sister-lol). I honestly think he married her to cover up his sexuality; but i could be wrong. I didn't think it was going to last either way though.
Posted by Lilly at 12:08 PM