I am honestly very excited about being able to do this interview and I thank the girls (Kelly & Kamille) for taking the time to answer all of my questions. If you want to get to know Karmina a little bit better; follow them on Twitter! This is just the written interview; the video will be coming later: 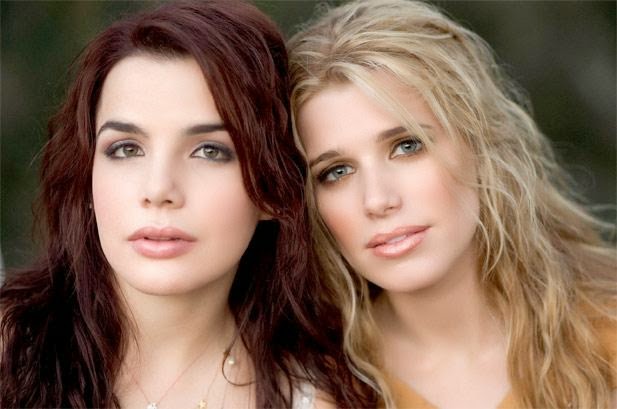 First off, I really appreciate you girls doing this for me - I know you are probably really busy.
1. How did you get started in the music industry? Have you been singing since you were kids?
WE'VE BEEN SINGING TOGETHER SINCE WE WERE 5 YEARS OLD! IT'S ALWAYS FUNNY WHEN PEOPLE REMARK AT HOW WELL WE HARMONIZE WHEN WE'VE TRULY HAD THE UNFAIR ADVANTAGE OF BEING SINGING PARTNERS FOR 20 YEARS. OUR FIRST MUSICAL TRAINING WAS IN CLASSICAL MUSIC. WE TOOK SOLFEGE CLASSES AND PRIVATE VOICE LESSONS FOR YEARS BEFORE BRANCHING INTO MUSIC THEATER. WE EVENTUALLY FORMED OUR FIRST BAND IN MIDDLE SCHOOL, A COVER BAND. WE INCORPORATED A FEW OF OUR ORIGINAL TUNES IN THIS BAND, CALLED KALABASH, AND EVENTUALLY REALIZED THAT WE HAD A LOT MORE FUN SINGING OUR OWN STUFF THAN MARIAH CAREY. KARMINA WAS BORN IN HIGH SCHOOL.
>
>
2. Out of YOUR songs; what is your favorite?
"THE KISS" WILL PROBABLY ALWAYS BE OUR FAVORITE BECAUSE OF THE MESSAGE. "WALK YOU HOME" IS OUR OTHER FAVORITE BECAUSE WE WROTE IT ABOUT EACH OTHER.
>
3. What can we expect to see/hear from you in 2011?
2011 IS A YEAR OF MYSTERY. WE'RE REALLY EXCITED ABOUT A LOT OF POSSIBILITY. THE ONLY THING WE CAN SHARE AT THIS POINT IS THAT WE'RE PLANNING A TOUR NEXT MONTH UP THE WEST COAST!
>
4. What do you like to do in your spare time?
WE LOVE TO SHOP, BUT WE'RE PRETTY PARTICULAR ABOUT WHERE WE SPEND OUR MONEY. WE TYPICALLY GO TO STORES THAT HAVE ONE-OF-A-KIND PIECES -- UNIQUE IDEAS FOR CLOTHING. BUT ENOUGH ABOUT CLOTHES! KELLY LOVES TO KNIT. KAMILLE LOVES TO MAKE FLOWER CLIPS. WE ALSO LOVE TO PLAY SOCCER WITH OUR FRIENDS ON SUNDAYS. AND COOK. AND PAINT. AND READ. AND WATCH MOVIES IN BED.
>
5. What other musicians do you like?
COLDPLAY, BJORK, THE BEATLES, IMOGEN HEAP. THOSE ARE OUR TOP FAVORITES AT THE MOMENT.
>
6. If you could work with anyone; who would it be?
COLDPLAY, BECAUSE WE FEEL SO MUCH INSPIRATION FROM THEM ON A DAILY BASIS.
>
7. What was it like working with Amanda Ireton on "The Kiss" video? (as we all know, I am a huge fan of hers)
AMANDA! WHAT WE LOVED MOST ABOUT AMANDA WAS HER HONESTY, WHICH IS PROBABLY WHAT MADE HER A GREAT REALITY TV STAR. (FOR THE RECORD, WE HAD NO IDEA SHE WAS ON REALITY TV UNTIL WE MET HER AND LEARNED MORE WHAT SHE DID FOR A LIVING!) WE HOPE SHE AND JOY ARE STILL TOGETHER AND IN LOVE, BUT MORE THAN ANYTHING WE REALLY HOPE THAT SHE'S BEEN LIVING A FEARLESS LIFE IN LOVE.
>
8. You were number 35 on my yearly countdown with "Slow Down" and it was your return to the countdown after your 2008 appearance with "The Kiss"; do you have a new single coming out soon and what it is called?
OO LA LA! WE HAVEN'T YET DECIDED WHAT OUR NEW SINGLE WILL BE -- IT WILL BECOME CLEAR ONCE THE ALBUM IS FINISHED. BUT. IT MAY BE A SONG CALLED "CONVINCED". MAYBE.
>
9. I know you have done songs for tv shows and such; what is your favorite television show?
THE FUNNIEST SECRET ABOUT US IS THAT WE HARDLY WATCH TV -- MOSTLY MOVIES! ALTHOUGH WE DO TRY TO CATCH THE EPISODES THAT OUR SONGS ARE IN. BUT IF WE HAD TO PICK A FAVORITE TV SHOW IT WOULD HAVE TO BE....WILL AND GRACE!
>
10. If you weren't singers; what would you be doing?
WE'D BE ASTRONAUTS.
Posted by Lilly at 12:02 AM