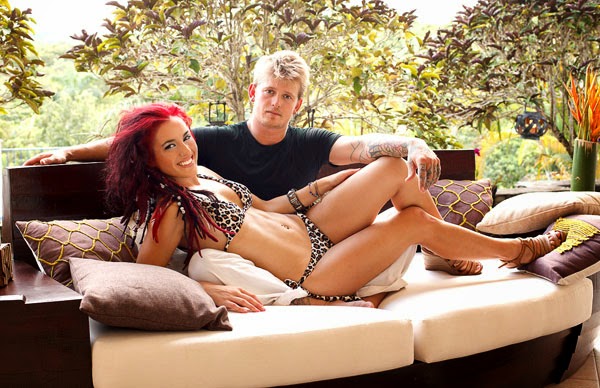 These two were nice enough to sit down and answer my questions about The Challenges and their real lives; you can find them on Twitter and Facebook!

First off, thanks a lot for taking the time to sit down and reply to these. I might have more questions later; but these are what i came up with for right now.

Cara Maria: The grey team lost two of its members during the final, were you guys told that if you won that the money would still be split 5 ways and did you think that was fair? (no offense to Abram or Sarah)

CM: as long as a person DQ's due to health reasons they would still get a piece of the money. no one quit on us.... abram and sarah had to stop because their body made them stop. so i do not hold them at fault for that. They did their best.

CM: Honestly I don't care.
AB:the truth is I dont watch the shows at all. So the only people I know are the ones I have done shows with, and even out of them- I only remember a handful. someone just sent me a link to one of the Infernos I did...even after watching it and seeing the other people and hearing their names I still dont remember them at all.

If there was a challenge where alliances wouldn't help save anyone, do you think the real competitors would win instead of the ones who coast their way through? Why or why not?
AB: I have actually never made an alliance to save myself from going in....it cost me on the gauntlet when I did not join when they offered, and I always make it to the end (unless it is a vote off like Battle of the Sexes II and you dont even get a chance to defend yourself).

Abram: Out of all The Challenge seasons you have been on, which has been your favorite (competition wise) and why? Which one was your least favorite and why?
AB:The Island was my favorite as far as Challenges go location and style wise- the first inferno was awesome because we had so much fun off camera! I have some pretty great stories from there! the truth is everyplace had something great for me- but when you are looking at things in a positive light you tend to find it:)

who are your favorite female and male competitors? (besides each other-lol)
CM: Fave Males: Landon, Darrell (Landon and D play a solid game and are great competitors), Nehamiah (awesome down to earth guy) Brandon, Luke, Vinny, (my homies from FM2) and Johnny cuz he makes me laugh. Fave Females: Laurel (hate her... love her... shes a good player... but needs to work on her people skills) Emily (shes a killer competitor and never complains... laurel could take lessons from her) and Beth because people give her shit yet she sticks around and absolutely cracks me up, and Carly syd and sandy and Mandy (my fresh meat girls) and Emilee is a sweetie too. Coral used to be a favorite... but due to her and Abram's romantic history I feel weird saying her name in the list.
AB: Cohutta, Ace, Landon I really liked hanging with Dunbar and Brad on this last one, Derrick, and Kenny because he is so damn funny. I always respected CT and Alton as competitors, but both are too on edge for me when at challenges....I like the easy goers. I dont really have any opinion about the girls- except for rachel- I had a crush on her in the gauntlet, and Laurel- as awful as her attitude is, I think she is a diamond in the rough.

Who is your least favorite competitor?
CM: Anyone who send me into elimination. and Chet.
AB: never thought about it- dont like to dwell on that sort of thing. If someone bothered me that much I would just walk away- this happens a lot for me on all the challenges. I just go off on my own and try and stay out of things....usually.

What do you do when you aren't doing Challenges?
CM: Paint (I sell them through facebook... facebook.com/caramaria) Make youtube vids with Abram (youtube.com/misscaramaria) and riding my horse..... and now onto making skull beads dreads which will be for sale soon!
AB: I am currently going on a National Tour to promote my kids book, The Star of Happiness. You can see samples of the book and order a signed copy online at starofhappiness.com I will be reading at bookstores, schools, and libraries, and we will be filming the whole thing. I also have a vacation rental, The Sun House, in Paradise Valley, Montana. I will be up there taking care of the place and guiding whitewater rafts this summer. You can see The Sun House and book it at bookings.mountain-home.com Outside of that I also sell my art and paintings in a number of galleries, or online through my facebook, (its under Abram G. Boise). And I continue to write for plays, TV shows, and film.

How do you feel you've grown and changed since your first Challenge?
CM: I'm much more levelheaded. no tears or tantrums.
AB: I feel as though much of my youthful wonder is gone....but it has evolved into something far more fascinating....i love the experience of life, and such a bizarre thing as the show is quite interesting. I feel more as though I am part of the production side than the cast side these days.

What are your thoughts on them bringing in the heavy hitters? Had johnny and tyler faced each other, do you think that the final result of the entire challenge could have been different?

CM: interesting to watch CT because he is a machine. but I'd rather see tori vs theresa and Johnny vs tyler.
AB: I think that it was cheap and ripped off both Johnny and Tyler. I thought it was lame. It took away from the challenge being a competition. But what are you going to do? I knew that something like that was going to happen. I dont know why it was Tina though, they could have had a tougher girl.

Which cast members from past shows are you friends with outside of the show?

CM: Nehemiah, Brandon, Luke, Emilee, Carly, Vinn
AB: I avoid being part of the crowd from the shows in my real life. Jeremy Blossom is the only cast I really talk to and consider a friend. Then there Cohutta and Ace- two of the coolest dudes you will ever meet. I want to go fishing with Brad.

Cara Maria: Tell me about your life outside of the show and how did you get into The Challenge thing?

CM: I am lazy. I like to ride my horse for hours and paint. I bartend to make money between shows. I submitted to real world a long time ago and 3 years later and several failed castings later... they called me for Fresh Meat. I guess they were holding off til they found a spot for me.

Abram: Tell me about your book and your life outside of the show (like real job and all that)
AB: I am a children's book author and will be on national tour promoting my current book, The Star of Happiness, published by SoundColor Productions out of Missoula, Montana. I am doing reading events promoting youth literacy at schools across the country. You can see samples of the book at starofhappiness.com as well as info about myself. We set up the event as a read-along with the kids at the school, and it can also be set up as a parent-invite read-along. After reading the book I discuss publishing, writing, and all about the work of being an author. The main focus of the event is to encourage children's literacy and the creative process. These reading events are free to all public schools. However, our publishing company only covers the cost for readings & signings at bookstores, not schools. It is at my expense as the author to do the extra readings at schools as a charity, because I believe it has great inspirational value.

CM: Wouldn't have changed a thing. Things happen the way they are meant to and you learn from them.
AB: I would want to be on the Abram, Derrick, Johnny, Brad team....its funny though- even without who is seen as the toughest guys, the grey team still dominated in the challenges.

What was your favorite gulag to watch?
CM: Not gulag- but the final challenge in Riot Act where Abram faced off against Brad. He looked soooooo hott! Grr baby grr! Every time I watch it I want to jump his bones again!
AB: The Johnny CT was unforgettable, but the best was not a gulag- it was the riot act- when Derrick went against Tyler, Brad, and Dunbar at the same time.

What kind of music do you like? Who is your favorite singer/band? (being a DJ, I have to ask haha)
AB: I love a band called Lucero- real southern rock 'n roll style. Metallica, jack johnson, jackson browne, rise against and against me, beethoven- ode to joy, and more and more i am listening to Bob Marley, I love the Rolling Stones and the Beatles.... wreckless eric, led zeppelin, jimi hendrix, santana, the doors, neil young, janis joplin- I dont listen to gangster rap. or too much metal.

CM: depends on my mood. Sometimes a lil classical... sometimes Sinatra.. sometimes some jazz and swing/big band.... sometimes even country! .sometimes alice in chains or tool or a perfect circle..... but never rap...never hip hop... never anything you hear in the clubs. I bartend and it stabs my brain to hear that crap.

What is your favorite movie/tv show?
CM: American Psycho and Batman Returns. Favorite TV show: Nip/Tuck even though it's over I was addicted. or any show involving Food. Unwrapped. mmmmm!
AB: Legends of the Fall, and a River Runs Through it- part of both movies were filmed in the home valley I grew up in out in Montana- but I love the depth of both= and all the pretty horses is a runner up.

Abram: I know Cara Maria's biggest fear is needles, what is yours?
AB: i am afraid of being afraid- Fear kills the minds ability to function- I enjoy the opportunity to be placed in situations where fear is the obstacle, and therefore self control is the goal.

Cara Maria: In honor of Abram's new book, what was your favorite book as a kid?
Hmm.... Loved Dr Suess. Also old fairy tales where there were no happy endings.
AB: I am going to jump in on this too- Rudyard Kipling just so stories, all of Dr. Suess, and St. George and the Dragon....Cara Maria really does like happy endings:)
Posted by Lilly at 9:25 PM