Believe you me, I've realized more so than anyone else how little time I've spent spotlighting the songs I've been grooving to in favor of Tweeting about them. These days, my mind is a bit A.D.D. when it comes to music -- the minute something new and exciting hits, I tend to forget about what I loved (and wanted to write about) last week. However, this one cut keeps coming back to haunt me from the minute I heard it a few weeks back.

I owe all of the discovery to DJ Lilly over at Resolution Radio. She has been in contact with a musician who isn't exactly new, but rather a familiar face, and her most recent piece of work is fun people of disco-lectro rompiness that sticks in your ears and won't give. 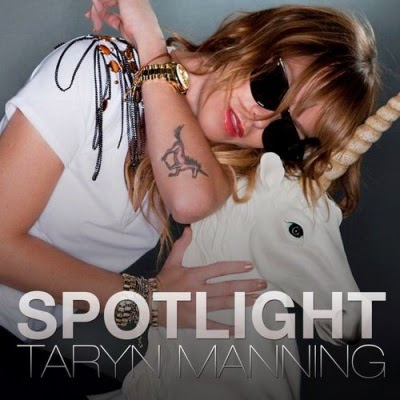 Her name is Taryn Manning. The name may only be vaguely familiar to some of you but I guarantee you've seen her before. She first came into our consciousness as an actress, debuting in the 2001 film Crazy/Beautiful, before her big break came via the Britney Spears film vehicle Crossroads in 2003 as her "bad ass" BFF. Since then, she's also appeared in 8 Mile, White Oleander and Hustle & Flow. Most recently, she's gained a role on the television revamp of Hawaii Five-O (which I have to say is much better than I assumed it'd be!).

She's also formed the duo electronica group Boomkat with her brother Kellin in 2003. The group is still active today, and recording under her own independent label, Little Vanilla Records (since 2004. Prior to that, the group was featured on DreamWorks Records, but were lost in the shuffle when the label folded into Universal Music Group in 2004). Their debut single, 'The Wreckoning", was a firm staple on several of my homemade "mix CDs" in 2003 (admittedly, a bit before I caught on to the conformity of iTunes). Their sound was starkly different from the rest of the pop music landscape at the time, and I distinctly remember dramatically mouthing along to the line "I came. I saw. I kicked some ass." as the song blared in my oversize headphones on the way to high school junior year.


Currently, Taryn is branching out on her own as a solo artist in her own side-project to the Boomkat sound, in favor of a more sunny, poppy, dance-and-synth-soaked flavor rather than Boomkat's unrelenting attitude and beats.

The result has been the single "Spotlight", now available for purchase on iTunes and oft featured on my new home on Resolution Radio. "Spotlight" takes a page out of early 90's dance pop with hints of late 1970's disco flair. It's a whirlwind of poppy goodness with an unrelenting backbeat. It's certainly not reinventing the wheel, but when a song makes you feel this good, none of that matters. It's an homage to the power disco-pop of yore, and in a post Lady Gaga Top 40, there is no better time than the present to celebrate pure pop. It is a bit more early 00's Kylie Minogue meets La Bouche in an Ace of Base blender. Is there anything better? The answer you're looking for is no.

If "Spotlight" is any indicator, the rest of Taryn's upcoming solo material will be well worth the wait.

***I reposted this because Taryn is "Artist of the Week" over on Resolution Radio AND she is a good friend of mine :)***
Posted by Lilly at 4:35 PM