RIP Whitney Houston: There Wasn't Another Like You, and Never Will Be 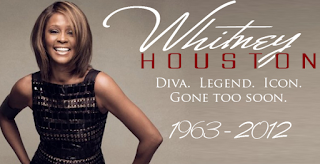 Whitney Houston, possibly one of the greatest voice in music EVER was found dead today at the age of 48. She was known for her voice, but in her later years she was known for her tumultuous marriage to Bobby Brown, and her drug use. There is no official cause of death yet, but I think we all know her heart just gave out from all the years of abuse. One of my favorite movies of all time is "The Bodyguard", and it happens to be the greatest selling soundtrack in the world. It was also her first movie. She was a six time Grammy Winner, and was scheduled to perform at a pre-Grammys party tonight. She is survived by her ex husband, and their daughter. I hope people will wise up eventually and lay off the drugs - play it smart. Another musical legend - gone in an instant :(.
Posted by Lilly at 10:31 PM

What a tragedy, but you put it well. Life is too short. Live it to the fullest, and appreciate what you have. RIP Whitney...