Interview: Whitney Myer (From "The Voice") 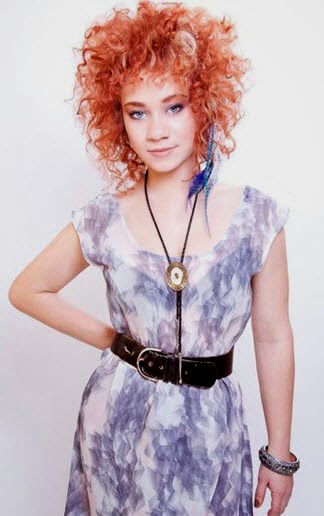 Since I got called a friend of hers on Facebook and Twitter, it only made sense to finally post the interview! Here is what April's Featured Artist had to say:

1. There is no doubt that you are going to be a star, but how long have you been singing as an indie artist?
I've been singing with my band, the Whitney Myer Band for 2 1/2 years, and during that time we've released a full length album under our own label as well as a single that is receiving airplay. Basically, we've worked our butts off lol.

2. You had all 4 judges turn their chairs around during your audition, what was your first thought and how excited were you?
I was absolutely elated. I've never felt so much adrenaline and serotonin in my body at one time. I couldn't believe it, truly. I was hoping for just one chair and to have all 4 turn was a true blessing and a humbling feeling. I love all of the coaches as musicians and I was very, very flattered.

3. Who did you feel was your biggest competition on the show?
I would have said Mathai, because sometimes we have similar phrasing and styles, though we differ in other ways too. Or maybe Jordis, cause she can belt it out.

4. Who were you closest to from the show?
LINDSEY PAVAO is my most precious bud and bromance participant :)

5. What was it like meeting Alanis Morissette?
It was amazing! She is such a ray of light and very honest and genuine. I really dug her and can't believe I got to meet her.


7. So you have a new album out, right? Tell me more about that.
Yes we have an album that we released in 2010 titled, "Dream Killer" and a new single we just released in February titled, "Broken". Our album is a cd of all originals save for one cover of Montel Jordan's "This is how we do it". I played guitar and piano on a few of the tracks as well. the idea "Dream Killer" related to the fact that we can sometimes be our own enemies, by feeling passionate about our dreams, but not going after them for fear of failing, or always saying things like, "Someday, I'll go to Europe" but you don't commit and never actually get there. It's about recognizing that we can foil our own plans and dreams and working through that.

8. When are you coming to New Mexico so I can see you perform? :)
I wish it was soon! We actually drove through NM on our way to SXSW in Texas last month. I know that we are working on some big regional tour plans, and I know I'll keep it in mind! We post all of our tour dates on our website.

9. I submitted your music to Hit Predictor and it got put in the jukebox, how exciting is that? The whole world had the chance to hear your music and tell record companies if it was good or not!
That is really, really cool! Thanks for doing that, those kind of things help more than you can imagine!

10. I have major stage fright, do you have any advice?
Yes. Practice, a lot. That way if you're worried you'll be nervous and mess up, you'll fall back on your muscle memory. (Yes, singing uses certain muscles lol). Also, start out small, like open mics and such and test yourself, and work your way to the bigger stuff!

11. What do you like to do in your spare time?
I like to read and jog and write songs. I also like seeing local, live music and going to hot springs with my best buds. There are a few really cool natural ones near my hometown.

12. If you could perform with any famous person, who would it be and why?
Janelle Monae, Sia, or Jessie J : ) They inspire me as vocalists, as well as women and writers. I identify with a lot of the messages in their songs and that is what music is really all about.
Posted by Lilly at 11:13 PM